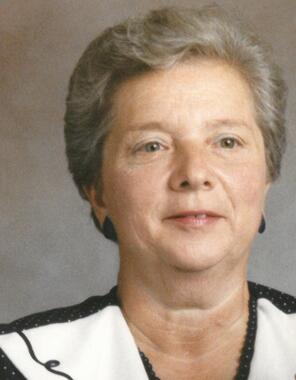 Valida A. Bell, 88, formerly of Wallace Hill Road, passed away Monday, Feb. 10, 2020, at the Plattsburgh Rehab and Nursing Center. She was born in Saranac Lake on Nov. 4, 1931, the daughter of Charles and Alma (Sears) Trombley.
Valida was employed in the cafeteria at Beekmantown Central School and later Ronnie's Michigans for 21 years. She married Herman A. Bell on May 3, 1949, at St. Alexander's Church. Valida was a devoted mother, grandmother and great-grandmother. She was a member of St. Alexander's Church and the Altar and Rosary Society of St. Alexander's Church. In her free time, she enjoyed testing her luck playing Bingo.
She was predeceased by her parents, her husband, a daughter Debra Conners, a son-in-law John Recore; her siblings, Alfred Trombley, Yvonne Burke, Bernadette Parent and her husband Irwin "Shorty" Parent, and Augustine Hayes.
Valida is survived by a son, Randy (Lynn) Bell; daughters, Barbara Recore, Linda (David) Daniels, Sandra (Edward) Boslet; a son-in-law, Brian Conners; her sister, Velma Ducatte; thirteen grandchildren, many great-grandchildren, and great-great-grandchildren.
Calling hours will be held on Sunday, Feb. 16, 2020, from 2 to 5 p.m. at the Brown Funeral Home, Plattsburgh. A Mass of Christian burial will be celebrated Monday, Feb. 17, 2020, at 11 a.m. at St. Alexander's Church. Interment will be at a later date at St. Alexander's Cemetery.
In lieu of flowers donations in her memory may be made to the Alzheimer's Association.
Arrangements are entrusted to the Brown Funeral Home, 29 Broad St., Plattsburgh, NY 12901. Online condolences may be offered at www.brownfuneralhomeinc.com.
Published on February 12, 2020
To send flowers to the family of Valida A. Bell, please visit Tribute Store.

Send flowers
in memory of Valida

A place to share condolences and memories.
The guestbook expires on May 12, 2020.

I am so sorry to hear of Valida's passing. I fondly remember that Valida and her daughter Debra pierced my ears when I was just 16. My Godmother Deanna Bell bought me my first stud earrings. I also didn't know until today that Debra passed away from cancer. Ill cherish the many wonderful memories with the Bell family and how they are ALL like family to my own family RIP Valida and Debra as well

David Reyell
To all of the family I want to tell you how sorry I am for your loss.
Linda Parker
So sorry to hear about your Mom she was a lovely person. She lived for her children and grandchildren. What a terrific cook she was. Have fond memories of her down here in Fl. You are in my thoughts
Rodney & Rae Provost
Sorry to hear about your Mom. Please know our prayers are with you,
we wish we could be there with everyone.
Dorothy Bourey

Sorry everyone...beautiful person and so much fun. she will be missed