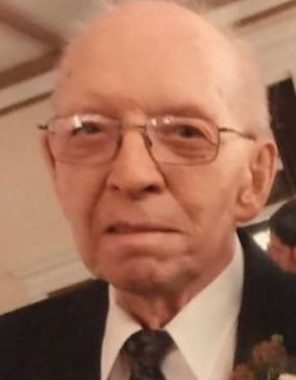 Back to Ronald's story

Ronald L. "Robert" Davidson, 97, of the Hardscrabble Road, Cadyville, died Thursday, Feb. 13, 2020, at the UVM Health Network, CVPH in Plattsburgh, with his loving family by his side.
He was born in Saranac, Feb. 12, 1923, the son of David and Anna (Swinyer) Davidson.
Robert married Naomi Bull on Nov. 2, 1946, by the Rev. Tarling at the Saranac United Methodist Church Parsonage.
As a young boy, Robert worked on Chum Christian's farm. At 18, he traveled to Baltimore to work at the Glen L. Martin Airplane Factory. He returned after 2 years to work at Pall Blade in Plattsburgh. At the time of their marriage, Robert worked for John Ryan, then at the Lyon Mountain Mining Co. in the machine shop. He worked at Peru Farm Center and drew wood with his own truck. Then he worked for Harry Alpert Construction at Plattsburgh Air Force Base, building many of the housing and the base hospital. Robert recently said that his best job of all was driving school bus for Saranac Central School District. He drove for 33 years full time and 2 years subbing. He was also working for Bob Ryan's Agway at the same time. During the summer he drove for AuSable Chasm and he also drove the shuttle bus during the 1980 Winter Olympics in Lake Placid. After retiring from driving, Robert worked for the Town of Saranac into his eighties.
Robert was so proud of the home that he and Naomi built together and the family that they raised. He adored their grandchildren and great-grandchildren and he enjoyed visiting with all who stopped by. He was an avid hunter who enjoyed being outdoors and working outside or puttering in his garage was something else that he loved. He could build or fix just about anything. Robert was a member of the Saranac United Methodist Church and he served as a trustee.
Left to cherish the memory of Robert are his children, Sue Anne Coryer, Robert D. (Sandra) Davidson, and Kathy J. (James) Facteau; twelve grandchildren, Cullen Coryer (Kelly), Carrie Coryer (Jeff Santor), Robert Coryer (Heather), Nicole Gillespie (Tom Burdo), Corey Davidson (Timolyn), Bethany Blair (Dustin), Amy Myers (Illya), David Davidson (Colleen) Ashley Eney (Brett), Jennifer Facteau-Rabideau (Otis), Jodi Facteau-St. Gelais (Jay), and Jamie Facteau-Gadbois (Ben); twenty-six great-grandchildren, Jackson Coryer, Maxwell Coryer, Addalyn Coryer, Colby Coryer, Kennedy Coryer, Scarlett Coryer, Summer Gillespie, Brooke Gillespie, Brady Blair, Zoey Blair, Molly Davidson, Elise Davidson, Isaac Davidson, Abriana Boissey (Dylan), Miya Wickramasinghe (Vihan), Keira Davidson, Peyton Davidson, Noelle Eney, Reese Rabideau, Rowen Rabideau, Quinn St. Gelais, Eliza St. Gelais, Amelia St. Gelais, Maci Facteau-Holland, Myles Facteau-Holland, and Oliver Facteau-Gadbois; brother-in-law, Robert "Bud" Seymour; and several nieces and nephews.
In addition to his parents, he was predeceased by his wife of 73 years, Naomi B. Davidson (Jan. 10, 2020); son and daughter-in-law, Ronald E. and Mary Ann Davidson; son-in-law, Alan Coryer; siblings, Agnes Ormsby, Lillian LaMora, Mildred Chase, Phyllis Seymour, Edward Davidson, and David "Junior" Davidson; and sister-in-law and brother-in-law, Patricia and Carlton Bull.
There will be no public calling hours. A funeral service will be held Tuesday, Feb. 25, 2020, at 1 p.m. in the Saranac United Methodist Church with Rev. Chad Deans, officiating. Burial will be held in the spring in the Saranac Independence Cemetery. A reception will follow at the home of Kathy and Jim Facteau, 1441 Hardscrabble Road, Saranac.
In lieu of flowers, donations in memory of Ronald L. Davidson may be made to the Saranac United Methodist Church, PO Box 185, Saranac, NY 12981.
Arrangements are in the care of the Hamilton Funeral Home, 294 Mannix Road, Peru, 643-9055. To offer an online condolence, share a symbolic gesture, or share a photo in memory of Ronald Davidson please visit www.hamiltonfuneralhome.com
Published on February 14, 2020
To send flowers to the family of Ronald L. Davidson, please visit Tribute Store.

Send flowers
in memory of Ronald

Rodger and Sally White
Robert and Naomi embodied the neighborliness that was Hardscrabble Road. I always think so fondly of them and all their great generations of family. You've been through a tough time, folks, but you have a strong foundation and some amazing life lessons from them. Sending our love and prayers for all of you.
Carol Lombard
They raised such a wonderful family. He and Naomi are reunited.
Marlene
I am so sorry to all his family and also sorry I was unaware of Naomi's passing and not sending condolences then. I remember riding my pony by their house and both of them always smiling and saying hi
View all