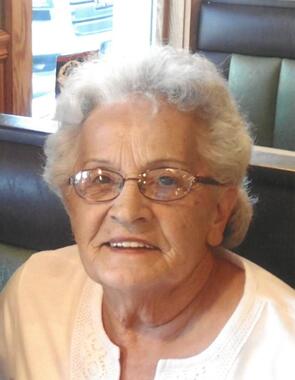 Back to Mary's story

Mary Osburn, 82, of Plattsburgh, passed away Wednesday, Dec. 11, 2019, at her home with her loving family by her side under the care of Hospice of the North Country. She was born in Chateaugay, N.Y., on June 24, 1937, the daughter of Clarence and Catherine (Rand) LaPlante. Mary retired as an account clerk at Plattsburgh Air Force Base. She enjoyed gardening, listening to country music, sewing, crocheting and taking walks with her friend Vi. Mary volunteered at the Food Shelf and at the thrift store for the SPCA. She enjoyed spending time with her grandchildren and great-grandchildren.
Mary was predeceased by her parents, her husband William Wayne Osburn, her long time friend Wilfred "Willy" Sears and several siblings.
Mary is survived by her children; Jodie Lynn Osburn of Malone, Randy Lee Sears Sr. and his wife Helen of Beekmantown, Lawrence Sears and his wife Sherri of Plattsburgh and her five grandchildren, Heather Sears and her husband Andrew Toussaint, Randy Lee Sears Jr. and his wife Melissa, Craig Sears and his wife Jenifer, Dustin Sears and his wife Raegen, Cameron Osburn and six great-grandchildren.
Calling hours and funeral services will be private and at the convenience of the family.
Interment will be next year at St. Peter's Cemetery.
Donations in Mary's memory may be made to Hospice of the North Country.
Arrangements entrusted to Brown Funeral Home, 29 Broad St. Plattsburgh, N.Y., (518) 561-3980. Online condolences offered at www.brownfuneralhomeinc.com.
Published on December 11, 2019
To plant a tree in memory of Mary Osburn, please visit Tribute Store.

Plant a tree in memory
of Mary

A place to share condolences and memories.
The guestbook expires on March 10, 2020.

Ruth Clary
Jodie my thought and prayers are with you and your family at this time. Love, Ruthie
Terrace West Apartments, Sue
Mary was an ideal tenant and a very nice lady that had a big heart. She would stop by the office to say hi and pick up donations for the food shelf. I will miss her quick wit and smiling face. My deepest sympathy to her family.
Judy Fassett/Neiman
I injoyed the visits and time going to her house and M Sweeney's with her when we did I'm sorry for the loss of Mary 🙏r.i.p Mary
Gladys Trudeau
I am so sorry for your loss.
View all