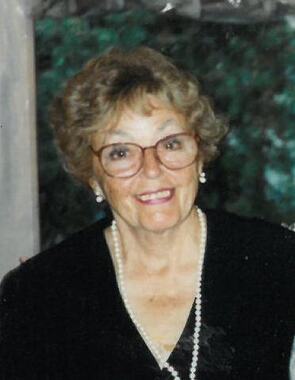 Back to Louise's story

Louise Meisenheimer, 95, of Nichols Avenue, passed away on Dec. 20, 2018, at her home, just as she wanted to, with the loving support of her family and hospice. She was born in Taylor, Pa., on May 13, 1923, the daughter of Alex and Stella (Werner) Schlappy.
She married Earl R. Meisenheimer on April 10, 1945, in Tonopah, Nev., and they embarked on a 20 year Air Force adventure, living in post-war Japan, Germany and throughout the United States before settling in Plattsburgh.
After having five children, Louise attended SUNY Plattsburgh where she received her Bachelor's Degree and later her Master's Degree in English. She went to work teaching High School English at Saranac Central School, retiring in the 1980s.
Survivors include four daughters, Sharon Meisenheimer of Manatee Springs, Fla., Laurie Bushey and her husband Jerry of Ponte Vedra Beach, Fla., Jan Forgette and her companion Gary Reil of Plattsburgh and Jodie Chandler and her husband Ken of Broomfield, Colo.; one son, Rob Meisenheimer and his wife Sally of Plattsburgh; eleven grandchildren and eleven great-grandchildren.
She was predeceased by her husband Earl Meisenheimer in 1995. She will be most remembered for her love of literature, as a gourmet cook, extensive traveler, creative gardener and avid bird watcher. Louise donated her body to UVM Medical School in the hope that someone could learn from her longevity.
Services will be held on Thursday, Jan. 17, 2019, at 11 a.m. at the First Presbyterian Church, 34 Brinkerhoff Street, Plattsburgh.
Donations in her memory may be made to the First Presbyterian Church Memorial Fund.
Arrangements have been entrusted to the R.W. Walker Funeral Home, 69 Court Street, Plattsburgh, N.Y.
Published on December 27, 2018
To plant a tree in memory of Louise Meisenheimer, please visit Tribute Store.

Plant a tree in memory
of Louise

A place to share condolences and memories.
The guestbook expires on June 25, 2019.

Restore the guestbook to view the 7 more posts by family and friends, and share a memory or message of condolence of your own.