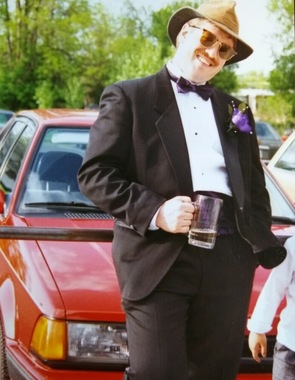 Back to Lawrence's story

Lawrence "Rip" Kirby of Rutland, Vt., passed away Saturday, Jan. 4th, 2020, at age 59, surrounded by those he held dearest.
Rip was born on Oct. 21, 1960, in Watertown, N.Y., to Lawrence and Yolanda Kirby, and spent most of his childhood in Chazy, N.Y. He earned his Bachelor's degree in electrical engineering from Clarkson University in 1984, and worked at Central Hudson Gas and Electric in Poughkeepsie, N.Y., until he moved to Rutland, Vt., in 1988. There, he worked as an electrical engineer for VELCO until 2001, and then CVPS/GMP until his retirement in 2017, during which time he earned his Professional Engineering (P.E.) licensure. He then worked as the electrical engineer for the State of Vermont Department of Public Service until his passing.
Rip was a captivating and engaging presence. In his free time, he enjoyed playing scrabble and doing crossword puzzles, cooking chili for charity, and writing when a topic moved him. He collected guns and loved classic cars; he prided himself on his ability to recognize the make, model, and year of almost any classic car, and loved to chew the fat with a fellow owner at various regional car shows. He was a wealth of knowledge and had an unmatched sense of humor; he enjoyed nothing more than getting a room full of people laughing. He was a generous, gentle, loving man who will be missed dearly by many.
Rip is survived by his best friend, soul mate, and fiancee Sue Burt and stepdaughter Lindsay Burt; his parents Lawrence and Yolanda Kirby; his daughter Elizabeth "Libby" Kirby and her partner Chris Brackett; his son David Kirby and his fiancee Rachel Fillioe; his grandson Waylon Kirby; his sister Ann Kirby and her husband Craig Blagoue; and countless friends and colleagues.
A celebration of Rip's life will be held on Saturday, January 18th from 1 to 4 p.m. at the Rutland Country Club in Rutland, Vt. In lieu of flowers, Rip's family asks that donations be made in his name to the Pulmonary Fibrosis Foundation
(app.mobilecause.com/vf/PFFTribute/RipKirby) to further research for the treatment of Idiopathic Pulmonary Fibrosis or to Smile Train (www.smiletrain.org/).
Published on January 10, 2020
To send flowers to the family of Lawrence Ripley Kirby, please visit Tribute Store.

Send flowers
in memory of Lawrence

A place to share condolences and memories.
The guestbook expires on April 09, 2020.

Patrick Hadden
My deepest sympathies to the Kirby family. Rip became one of my best friends when I met him after he moved to Poughkeepsie back in the day. He was funny, intelligent and a loyal friend. Rip was the kind of person you always wanted to be around. There are so many fond memories of Rip I'll carry with me for the rest of my life. Until we meet again my friend.
Robyn Jennette
I remember coming to Rip's house since my grandmother lived just a short distance down the road. So sorry for your loss. Prayers for your family.
Kathy & Tim Ryan
We were so sorry to hear that Rip had passed. We are sending prayers and hugs for Mr. & Mrs. Kirby and family.🙏❤
Michelle Baker Gruetzmacher

A sad day when we lost Rip. He was always friendly and welcoming to all who knew him. Such a loss for those who knew and loved him. My heartfelt love and sympathy to his family. He will be missed! RIP to our friend.

Andrew Smith
Wow, all those great times together in Chazy with Rip. I remember playing in the Rip’s front yard and his mom called from the door, “Rip...hurry up; Lassie’s on TV”. He rolled his eyes embarrassed and we all had a good laugh. Rest In Peace childhood friend.
Ann Bordeau
So very sorry for your loss. This is very sad news. Condolences especially to Larry, Yolanda and Ann.
Gerry and Sharon Beggs
So sorry for your loss. We're thinking of your family and sending prayers.
Pam Neverett
My sympathy to Rip’s family. I have many memories of shared times growing up in Chazy where he also enjoyed the spot light
View all