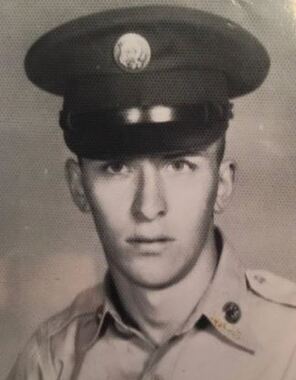 Back to John's story

John F. Bourgeois, 70, of West Chazy, passed away away peacefully Wednesday, Feb. 12, 2020, at UVM-CVPH Medical Center with his loving family by his side. He was born in Middlebury, Vt., on Dec. 19, 1949, the son of Joseph and Janet (LaPierre) Bourgeois.
John treasured all of the moments he had with his family, whether it be traveling, hunting, or watching his grandchildren play sports. After graduating from Chazy Central Rural School in 1967 John entered the U.S. Army, proudly serving his country in Vietnam from February 1968-September 1969 with an honorable discharge. John was awarded six medals, among those two Purple Hearts and a Bronze Star. John retired from the Clinton County Sheriff's Department in June 2010.
John was predeceased by his father, Joseph Remi Bourgeois. His life will forever be cherished in the lives of his family. John is survived by his loving wife, Barbara (Nephew) Bourgeois; their children, Kimberly Villemaire and her husband Blair and John Bourgeois and his wife Aimee; their grandchildren, Kallie and Kirsten Villemaire and John Bourgeois; his mother, Janet LaPierre; and his siblings, Edward Bourgeois and his wife Linda, Robert Bourgeois and his wife Melody, Janice Bourgeois, Gary Bourgeois, and Linda Misiaszek and her husband Alex.
Calling hours will be Sunday, Feb. 16, 2020, from 1 to 3 p.m. at Brown Funeral Home, Plattsburgh, N.Y. A funeral service will follow for family and friends in the Brown Funeral Home Chapel. Interment with military honors will be at a later date in St. Louis of France Cemetery, in Sciota, N.Y. In lieu of flowers, donations in his memory may be made to the FitzPatrick Cancer Center or the Wounded Warrior Project. Arrangements have been entrusted to Brown Funeral Home, 29 Broad Street, Plattsburgh, NY 12901, (518)561-3890. Online condolences may be offered at www.brownfuneralhomeinc.com.
Published on February 13, 2020
To send flowers to the family of John F. Bourgeois, please visit Tribute Store.

Send flowers
in memory of John

A place to share condolences and memories.
The guestbook expires on May 13, 2020.

DAVID BLAISE
RIP CUZ
Stephen Friedrich
I first heard about John’s passing from my sister Jean and I was quickly saddened by this news. I then just as quickly had such fond memories of the fun times I had with John back in the 70’s & 80’s he was such a nice guy and I looked up to him for all he sacrificed for his family and country by going into war he was one tough man for sure. My thoughts are with all his family and friends and may he RIP.
Katie Bissette
You will be missed
Paul & Shirley Rascoe
Dear Barbara, our thoughts and prayers are with you. Heaven has gained a wonderful soul.
Lisa (ero)lecuyer
so sorry for your loss johnny was a great cousin and will always remember him
Rodney Provost
Sorry to hear about John.. I am currently staying in Myrtle Beach and will
not be back until April. My condolences to the family.
Theda & Max Doser
Barb, Kim, John, Family
Words fail to express our sorrow for your loss. Please know we are with you through this difficult time.
Sue Proulx
So very sorry to hear about John's passing. He used to be at Neverett's house a lot when I was a kid. He was such a nice guy.
Beverly A Garrand
Barbara , Kimmy an Johnny an family, I'm so sorry for the loss of your loving husband, father and grandfather. My sincerest condolences to all of you. He will be deeply missed by all. R.I.P John
Rob Besaw
Rest in peace brother....it was an honor..
View all