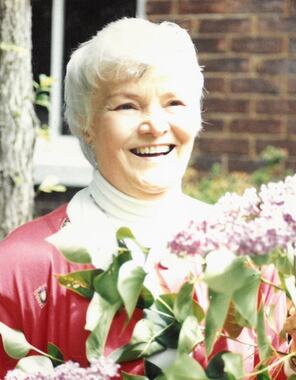 Back to Irma's story

In Memory of Our Mother Irma (Clark) Leavitt
With profound sadness we announce the passing of our Mother and our friend Irma Jean Clark Leavitt of natural causes, at the age of 97 years young on Dec. 12, 2019, at 5:25 a.m., following a magnificent lifetime of giving to all who knew her. Irma's husband Teddy C.J. Leavitt referred affectionately to her as "Irma Jean" for their lifetime together, an altogether loving sobriquet. Irma and Ted are survived by and raised three sons, Merrell D. Leavitt, Darrell G. Leavitt and Teddy C.J. Leavitt Jr., and a daughter Linda L. (Leavitt Guibord) Lonnquest. They had 9 grandchildren and 6 great-grandchildren.
Irma (Clark) Leavitt was born as a set of twin girls in Boise, Idaho, June 21, 1922, of first generation Immigrants Alma (Voss) and Robert Ballot, from Ireland and Germany respectively. Robert was an accomplished violin and cello-maker of the Stradivarius-models in Germany, a business that he successfully carried on with them to Boise. The family came to America with three sons, but Alma was pregnant with the twins and died in childbirth in the U.S. The twins, Irma Jean and Alma Irene, were sent for adoption in Boise by their father, out of the necessities of the time. The baby girls were quickly adopted by Joisa and Edward Clark and were thereafter happily raised in Oregon State. When the girls reached 21 years of age, their Ballot brothers Bob (Robert Jr.), Larry and Ernie joyously found the girls after years of searching for them.
Irma and Irene spent their formative years under Joisa's deft care as a "Practical Nurse" of that time. They grew healthy and lovingly close in their relationship, and gave years of Performances of Classical Music as twins on Irma's violin and Irene's cello, made by Robert Ballot. They attended Northwest Christian College together in Eugene, Ore., as Music and Religion Majors, where Irma met Ted and his large Leavitt family while he too attended NCC. Irma and Ted married on Dec. 18, 1946, as he departed with the Army Air Corps as a Paratrooper. Ted and Irma left Oregon after WWII and after he finished his schooling in 1958. In 1960, our family settled in Plattsburgh, N.Y., where Ted taught New Math at SUNY for the next 27 years, the remainder of his life. He passed in 1987.
Our Mother is affectionately remembered for her love of music and of the keyboard and the organ, having taught our brother C.J. for a career in playing the organ professionally. Both Mother and C.J. had a grand facility of playing by ear. Both of them could pick up tunes and really play them. But our Mother was most fondly remembered for her adorably captivating smile; her keen sense of humor even in the face of adversity; her incredibly spunky and positive outlook and for her generous heart. She was known by all her children and their offspring to be loving and affectionate, a positive fighter for Rights and a "Go-To-Person" for all who needed her help. She was the "fixer of all things."
Our Mother Irma Leavitt remained forever young, a devout Christian who believed in the power of prayer, with talents and grace in abundance, always with belief in her own abilities and ours. She projected a special brand of thoughtful care-giving and joyfulness in life that makes her Passing from our lives an auspicious time for all who admired her in the greatest measure. Irma Jean Leavitt enjoyed a Big Adventure in Life, one that goes with us, all our lives-long.
The Leavitt Children
To share a memory or condolence with her family, please visit www.rwwalkerfh.com.
Arrangements have been entrusted to the R.W. Walker Funeral Home, 69 Court Street, Plattsburgh, N.Y.
Published on January 10, 2020
To plant a tree in memory of Irma Jean Leavitt, please visit Tribute Store.

Plant a tree in memory
of Irma

A place to share condolences and memories.
The guestbook expires on April 08, 2020.

Staub Spiegel
So sorry to hear of your families loss. I too, remember her smile. Beautiful lady, a very talented family. All the best.
View all