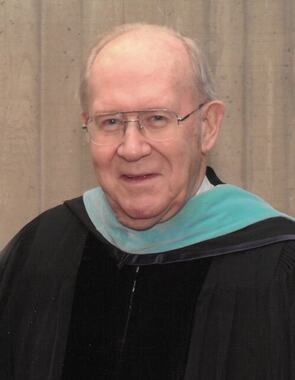 Back to Dr. Charles's story

Dr. Charles W. Mitchell Sr. passed away Friday, February 7th, at UVM Health Network, CVPH after a short illness. Dr. Mitchell was born in Oneonta, N.Y., Dec. 15, 1929, to Edith (Stratton) and Claude Joseph Mitchell. Charles is survived by his wife of 63 years, Joan (Vrooman), daughter Nancy Mitchell Rogers, son Charles Jr. and wife Catherine, grandchildren Colden and Myles. Surviving also are several nieces and nephews of his predeceased brother John, sisters Emily DePalma and Metta Bagg.
Charles graduated from Oneonta High School in 1947. He went on to earn a BS and MS from Oneonta Teacher's College and a doctorate from West Virginia University. He served for eight years in the New York Army National Guard in Oneonta.
Charles began his teaching career at Center Street School in Oneonta. He also taught at Euclid Ave School in Schenectady, N.Y. In 1958 he joined the Montgomery County BOCES as the science consultant for Canajoharie and Fort Plain schools. In 1960 Charles joined the NYS Education Department. While there he authored the Elementary Science Syllabus and Handbook for elementary schools in NY state. In 1962 Charles joined the faculty at SUNY Plattsburgh. During his tenure he developed and taught 46 different courses.
Charles was an avid birder and authored many publications about birds. His research included the Great Blue Herons of Valcour Island as well as groups in Florida and Colorado.
Charles was named Distinguished Alumni and to the Athletic Hall of Fame at the State University College at Oneonta. Charles was selected for the Wall of Distinction at Oneonta high school in 2017.
Honoring Charles' wishes there will be no visitation or funeral service. He said, "I came into this world without any fanfare and that's the way I'm going out." Friends may donate to the charity of their choice in his name should they wish.
To share a condolence with the family, please visit, www.rwwalkerfh.com.
Arrangements have been entrusted into the care of the R.W. Walker Funeral Home, 69 Court Street, Plattsburgh.
Published on February 11, 2020
To send flowers to the family of Dr. Charles W. Mitchell, Sr., please visit Tribute Store.

We are thinking of you and send our deep sympathies.

We hope you can celebrate a great life lived. Charlie was a kind confidant and friend to our Dad. His legacy in education is cemented and will carry on in all that he influenced.

Best Wishes,
Paul Hackett Jr and family
Dottie Broderick
My deepest condolences to Dr. MitchellS family. I so enjoyed his classes at PSUC. He surely left his mark on this world with his appreciation of science. May he now Rest In Peace.
View all