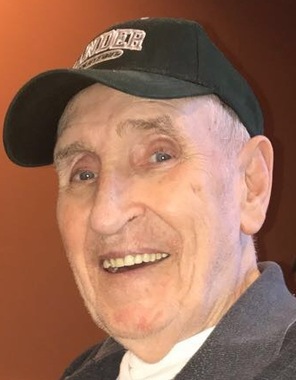 Back to Donald's story

Donald R. Collins, 86, of Lyon Mountain, died Sunday, August 5, 2018 at the Alice Hyde Medical Center, Malone. Born on April 6, 1932 in Lyon Mountain, N.Y., he was the son of Leonard and Delima (Secore) Collins. Donald married Barbara LaPoint in Lyon Mountain. She predeceased him on July 14, 2004. He enlisted in the United States Army in 1949 and was honorably discharged in 1952. He worked as a laborer at Georgia Pacific in Plattsburgh for 37 and a half years before retiring. He was a member of the Steel Workers of American and the Lyon Mountain American Legion, Sorrell Post. He was a member of the Lyon Mountain United Methodist Church. He is survived by two daughters, Carol LeClair and her husband John of Lyon Mountain, Kathy Paige of Malone; five grandchildren, Megan LeClair, John LeClair Jr., Rene Martin and her companion Matt Malley, Robert Paige Jr. and his companion Stefanie Peloquin, Jason Paige and his companion Mandy Charlebois; seven great grandchildren, Kylie Martin, Kenzie Martin, Peyton Martin, Bryson Malley, Grace and Hope Paige, Parker Paige; a brother, Ronnie Collins; and a sister, Syliva Durkee. Besides his wife, he was predeceased by his parents; and four brothers, Bernard, Maynard, David and Robert Collins; three sisters, Anna Collins, Violet Dibble and Geraldine Dashnaw. Calling hours will be held at the Chateaugay Funeral Home on Friday, August 10 from 2 p.m. to 4 p.m. A prayer service will follow immediately in the funeral home chapel. Entombment will be held at Whispering Maples Memorial Gardens, Ellenburg Depot. Arrangements are with the Chateaugay Funeral Home. Online condolences may be offered at www.chateaugayfuneralhome.com.
Published on August 7, 2018
To plant a tree in memory of Donald R. Collins, please visit Tribute Store.

Plant a tree in memory
of Donald

A place to share condolences and memories.
The guestbook expires on November 05, 2018.