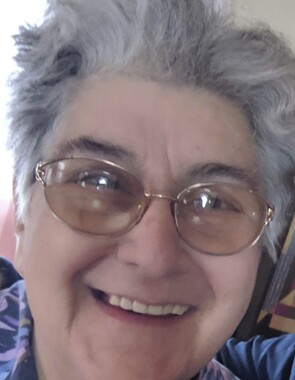 Back to Carol's story

PLATTSBURGH - Carol Anne LaDuke Burnam, passed away on Nov. 26, 2019. She was born on June 25th, 1945, in Standish, N.Y., where she grew up as the youngest of three children born to Blanche (Romeo) LaDuke, and Victor LaDuke.
After graduating from Lyon Mountain High School in 1963, Carol became employed at SUNY Plattsburgh, where she worked until her retirement, 36 years later in December of 1999. During her career, she dedicated her secretarial skills to various departments, but the most joyful part of her job was the coaching she provided to dozens of student workers, some of whom will still send her Christmas cards this year.
In 1968, Carol's son, Scott was born and she courageously raised him as a single mom, with the love and support of her parents, at a time when there was more stigma than support available for single mothers. They lived in a modest trailer in Riverview Trailer Park, which survived an ice chunk crashing through the roof in 1979 (the result of a blast to break an ice jam), a fire in 1982, and numerous spring floods. That little trailer and Carol's love and hard work provided a stable and durable home in every sense of both words for Scott, instilling pride, dignity, and a strong work ethic in him that still help guide him to this day. She later purchased her home on Champlain Street, where she lived until her death.
She enjoyed bowling in a league with her friends when she was younger and during the later years of her career, she became an avid Cardinal Hockey fan. During home games, she and Scott could be seen sitting with the Zoo Crew in her game-worn jersey, where she would cringe each time they serenaded her to her least favorite song ever: "The Lion Sleeps Tonight." Despite her immense dislike of that song, Carol always enjoyed the companionship of a cat or two in her home.
In addition to her parents, she was preceded in death by her brother Robert (Bob) LaDuke of Dannemora, N.Y., and her sister Elizabeth (Betty) Dow of Newport, N.Y.
Carol is already deeply missed by Scott and his wife Robin and their three children, all of Dayton, Ohio: Riley (20), Connor (16) and Nathan (9). She is also survived by several nieces and nephews.
If you want to honor Carol's memory this holiday season or any time, Scott invites you to do so with a kind deed for someone or by making a donation to the charity of your choosing. If you don't have a charity in mind, consider supporting the Elmore SPCA and let them know the donation is in Carol's memory.
To share a memory or condolence with the family, please visit www.rwwalkerfh.com.
Arrangements have been entrusted to the R.W. Walker Funeral Home, 69 Court Street, Plattsburgh.
Published on December 9, 2019
To plant a tree in memory of Carol Burnam, please visit Tribute Store.

Plant a tree in memory
of Carol

A place to share condolences and memories.
The guestbook expires on March 08, 2020.